The Berlin TV Tower (Fernsehturm) is probably the most recognisable icon in the city’s skyline. Berliners nicknamed it the Alex Tower and it receives more than a million visitors annually.

Today, it is one of the biggest tourist attractions in the German capital, standing out from the rest of the buildings with its large steel dome and its skyward pointing antenna.

It is located in the central Mitte district and is just a stone’s throw from Alexanderplatz.

It was built during the times of the GDR, and nowadays the best thing to do is to enjoy its panoramic terrace, with one of the best views of the city while you visit the bar and restaurant.

The main advantage of going up to the Reichstag dome, (the German parliament building) is that it is free, and the main disadvantage is that you have to book in advance, and considering the fast changing weather in a city like Berlin, it can be a bit tricky to schedule your visit on a clear day to appreciate the views and take good pictures.

However, since it’s free, there’s nothing to lose by booking in advance and going up to have a look at the government district and the centre of Berlin.

If you haven’t been able to book in advance, don’t worry: you can sign up for the tour on the day if there are still places available, otherwise you can always wait at least two hours or two days later. Your booking will only be accepted if it is for the same day or the following day at the latest.

This building of curious architecture, located on Potsdamer Platz, stands on one of the places where we used to find the division of the famous wall. If you look up, you will see that the perimeter of the old wall is marked with pebbles.

The main interest of the Kolhoff Tower, apart from the building itself, is that on the 24th and 25th floors it houses Panoramapunkt, an open observation deck that offers the best panoramic view of the centre of Berlin. It has a café and a small exhibition that reviews the history of the reconstruction of the area.

Since this terrace was inaugurated in 1999, the Panoramapunkt has become one of the most visited tourist attractions in Berlin, and no wonder: from its viewpoint we can see the Brandenburg Gate, the Berlin Cathedral, the television tower, the Reichstag… a complete panoramic view of the most significant buildings in the German capital from a building that boasts the best sunset in Berlin.

Operated by the company Air Service Berlin, this helium balloon is attached to the ground by a steel cable and rises to a height of 150 metres for a breathtaking view of Berlin.

The downside? It’s the most expensive viewpoint in Berlin, costing around €19.90 per adult and €6.90 for children between the ages of 3 and 10.

If you decide to visit it you have to choose the right day to go up, as the views are very good as long as the sky is clear.

It is located next to Checkpoint Charlie, at Zimmerstraße 95-100, so you can take advantage of your visit and try to find our Hotel Gat Point Charlie. In the rooms at the back you can see the balloon as it rises.

The highest hill in Berlin (over 65 metres high), it is clear that Kreuzberg Hill offers one of the best views. It is located in the Victoriapark, (a park located in the heart of Kreuzberg, a very trendy neighbourhood in recent times).

Once at the top you have to walk up to the highest part and you can admire the views of the Kreuzberg district and the centre of Berlin, and even catch a glimpse of the old Templehof airport, which has been converted into a park open to the public (and quite curious, as you can imagine). A romantic spot from which to watch the sunset over Berlin is a real pleasure.

-To get there, take the metro to Mehringdamm (lines U6 and U7) and walk about 10 minutes to the park entrance, which, of course, is free.

Our last viewpoint takes us to the outskirts of Berlin… and we assure you that, if you like to get away from the typical tourist sites, this tower, almost 50 metres high, will not leave you indifferent.

It is a former spy station used by the American secret services for eavesdropping during the Cold War, and abandoned after the fall of the Berlin Wall. It is not surprising that David Lynch himself (yes, the film director and creator of Twin Peaks) noticed this place, which he tried to turn into a kind of esoteric university (something that was obviously not allowed by the Berlin City Council).

Before becoming a spy stronghold, the site was once a training centre for Nazi soldiers, which the Americans covered with tons of rubble at the end of World War II to build this tower on the promontory, which stands 115 metres above the outskirts of Berlin and is not only a great view of the city but an attraction in its own right.

Today, Teufelsberg is home to graffiti artists, street art photographers and the occasional tourist with an explorer’s soul who comes here to see what is undoubtedly one of the strangest, most ghostly and fascinating places in Berlin. 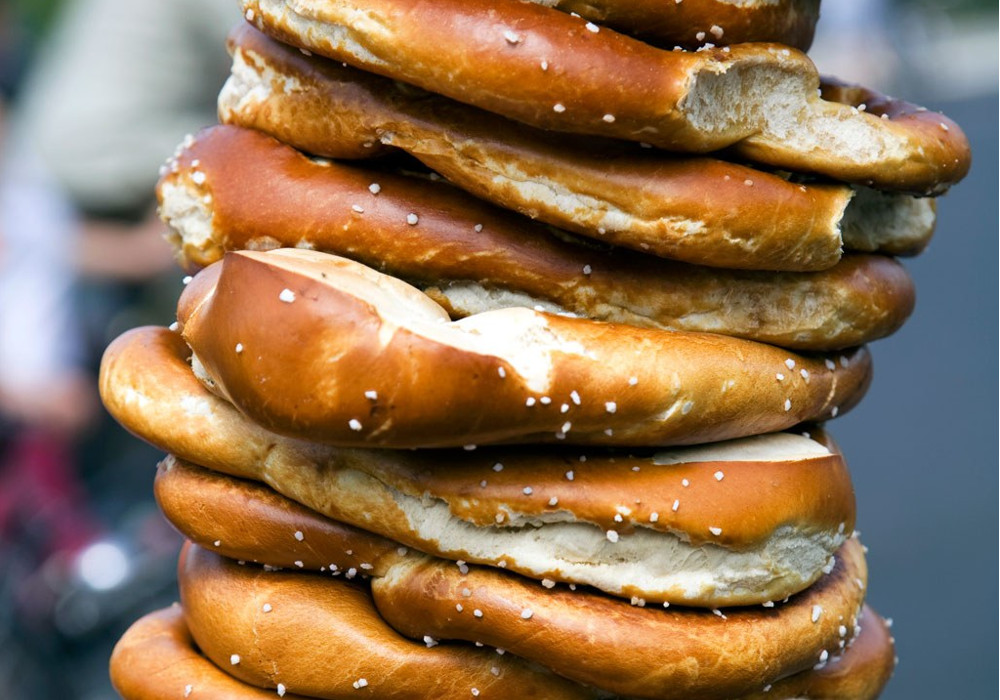 Up until now, our posts have centred on the more unusual places to visit in the city, such as unique bookshops, alternative historical sites, less conventional venues for an after-work drink or the best spots for enjoying an alternative view in Berlin.

That doesn’t mean that we don’t love more traditional things, too. This post is about typical Berlin fare – Bretzels, Currywurst, Schnitzel Holstein and Döner Kebabs – that are a must-have for any hungry traveller looking for an authentic culinary experience.

Breztels (also Brezels or Pretzels) are twisted salty knots of chewy bread, although you may prefer the sweet version with butter and cinnamon. We recommend Brezel Bar if it’s your first time.
Interesting fact: some say Bretzels originated with the Celts, who ate them to celebrate the arrival of spring. At that time of year, the sun is passing through the constellation of Aries, and the shape of this treat resembles its horns. 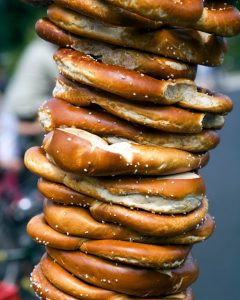 Berlin is very proud of the iconic Currywurst, a sausage bathed in a sauce made with ketchup, Worcestershire sauce and curry powder. Make your way down to Konnopke’s Imbiss to enjoy a delicious, classic version of the ultimate street food.
Interesting fact: this dish is said to date back to 1949, when a local woman, Herta Heuwer, experimented with the ingredients ‒ which she had received as a gift from British soldiers ‒ and used them to dress a cooked sausage. 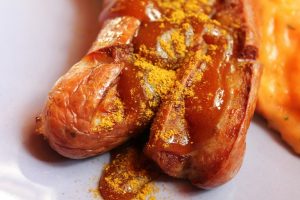 A Schnitzel Holstein is a breaded veal cutlet topped with a fried egg and served with anchovy fillets and capers, fried potatoes and toasted bread. KaDeWe Feinschmeckerbars is the place to go for this culinary delight.
Interesting fact: in the 19th century, a mayor of Berlin would always insist his meals were served quickly. Obliging him, chefs in a restaurant decided to serve his first and second course together, and the Schnitzel Holstein was born. 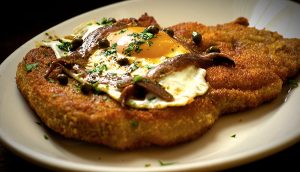 Our final recommendation is a Döner Kebab, a delicious by-product of the cultural exchanges with the Turkish community. Try this delicacy at Mustafa’s Gemüse Kebap. Don’t be put off by the queue – it’s well worth the wait. 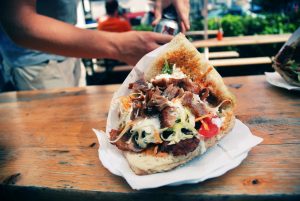